Love and Affection in Games:
a Design Primer

Bringing together thought leadership in romance and affection games to explain the past, present, and possible future of affection play in games

Introduction: On a History of Love and Affection Games:

This chapter introduces the history of affection in games, focusing on the technological and social constraints that shaped their development. It emphasis that affection games are part of an evolution of human computer interaction that requires both the development of engaging interactions and social comfort with such interactions.  It is argued that the need for such play provides opportunity for wider audience and more meaningful experiences.  The failure to develop affection games at the pace and complexity of other play (namely war games) is attributed to cultural prohibition and censorship. The history of affection games is compared to the other types of games and to the evolution of media subjects, most notably film.

On the Origin and Definition of Digital Affection Games:

On Flirting Games and In-Game Flirts:

This chapter provides a focused examination on flirtation as a game mechanic and as a subject in games. It uses flirting in games as a way to examine the moral and conceptual issue of consent in playful human-computer interactions, providing some grounding for further philosophical, legal, and experiential research.  It provides examples of how the models described in chapter 2 can be applied specifically to the execution of flirt mechanics in a contemporary game. The chapter combines wide-interdisciplinary research in game theory, sociology and psychology as a simple demonstration of how specific theories can be applied to the challenge of designing meaningful human-computer interactions in games. It then concludes with specific examples of flirting focused games and a brief analysis of romance in games.

In the Mood for Love: Embodiment and Intentionality in NPCs

This chapter examines the experience of romantic love between a player and a non-playable character (NPC) in the context of single-player avatarial games. Romantic love is to be understood here as the experience of being in love with someone. As such, it is demarcated from other types of love, e.g. love for friends, family members, divine love, etc. In the chapter, it is argued that for a game to successfully afford the experience of romantic love there are two main challenges that need to be addressed. One is the embodiment of the NPCs and the other is their intentionality. This means that the game should provide for NPCs that are to be perceived by the player as autonomous subjects with their own intentions and goals rather than passive bodies that cater to the player’s agency. The argument is built upon embodied perception, Merleau-Ponty’s phenomenology, and Sartre’s existentialism. It is finally argued that this challenge will eventually be overcome by artificially generated agents rather than fictional, designed characters.

Would You Kindly Parent?: Parenting, Caretaking, and Love in Games

How do games express and represent parental love, affection, and caretaking through their goals, game mechanics, and other design elements? How is parental love both exalted and problematized? This chapter discusses how these parental tensions play out in two different games, That Dragon, Cancer and Life is Strange 2, building off a previous analysis conducted with Bioshock. This chapter argues that these games enable players to build relationships with other characters and/or practice affection and caretaking. These games express the tensions of parenting in their storyline, themes, and the player’s activities. Moreover, the game itself also acts as a type of authority figure who parents the player through a system of rules and boundaries. The two games are explored and compared using a textual analysis approach. Implications for game designers are also shared, such as to how designers can more effectively “parent” their players, while also facilitating trust and affection in a game.

This chapter examines how complicated affections between female friends are interwoven within the ludic and narrative components of two videogames that explore reunions between estranged friends: Life is Strange (Dontnod Entertainment 2015) and Night in the Woods (Infinite Fall 2017). This chapter proposes that the estranged friendships in these two games attest to the imperfections and resilience of female friendships. They thereby offer a digital space for exploring sincere coming-of-age complexities between late-adolescent girls that crucially remain unobstructed by heterosexual pursuits. Attention on this subject in videogames has mostly been confined to critical analyses of the girls’ games movement of the 1990s. This is most reasonably due to the limited presence of female friendships within those games. The recent re-emergence of female friendships in these two contemporary, financially viable and critically successful videogames therefore necessitates an updated consideration. Mapping these videogame designs deepens how the construction of female friendships are theorized and in turn encourages designers to continue to pursue productive feminine content in mainstream games.

Over Her Dead Body: Love and Affection in Japan through Shadow of the Colossus

This chapter examines how the concept of love has been explored, constructed, and challenged by the 2005 Japanese computer game, Shadow of the Colossus. The chapter focuses on how affection and emotional attention are modulated by the game’s design and the medium’s capacities. It, therefore, addresses two main questions: how is love represented through the medium of computer games, and what does ‘Shadow of the Colossus’ add to the wider polyphonic conversation on love, affect, and attachment in contemporary Japan. To do so the chapter first situates the game within a wider conversation on love and affect in Japan, and its relations to the theme of life and death boundary transgressions, a narrative structure that tells stories of characters journeying to the afterlife to resurrect a loved one. The chapter then applies a methodology based on design theory and retentional economy to focus on the mechanics of the game, and the story and ethical challenges subtracted from playing it. Then, by applying this methodology it argues that ‘Shadow of the Colossus’ challenges romantic love, and its toxic origins and outcomes. Love, as any other ideal, is represented as a force capable of destruction and danger when motivated by individualistic and selfish obsessions.

This chapter is a case study of the ideology behind the representation of love in the videogame Dragon Age: Inquisition and other shared properties by BioWare. It proposes that throughout the industry, love and romantic relationships are depicted as a retreat from conflicts, dangers and the stress of the wider world. To this end, developers often depict love as something which does not influence anything aside from the personal feelings of the partners involved, stripping it of any potential political, philosophical, religious or any other public context.  This, in turn, hints at deeper ideological problems in the approaches of AAA-studios to the depiction of romance in videogames.

Through BioWare developers’ experimentation, iteration, and willingness to leave less effective mechanics behind, in-game relationships in the Dragon Age series evolved across the three primary games to better mirror reality, promote diversity, and offer more compelling rewards for getting to know party companions, both romantically and platonically. Not only have these changes often enhanced relationship authenticity and promoted the engagement of many different types of players with the Dragon Age series, but they also have established a precedent for the expected romance options and social impact of future RPGs. The chapter "Innovative Origins, Playersexuality, & Complex Inquisition: The Evolution of Relationship Mechanics in Dragon Age" explores both the means by which the Dragon Age series has achieved such a high standard for romance and sexuality in digital roleplaying games, as well as ways in which future developers can improve upon BioWare's unique and empathetic approach.

Presented in order of apperance in the book

Critical Gameplay, Big Huggin' is a game designed for use with a custom teddy bear controller. Players complete the game by providing several well-timed hugs to a 30-inch teddy bear. Instead of firing toy guns at countless enemies or revving the engines of countless gas-guzzling virtual cars, why not give a hug?

Fellowship of Fools: The Game (FoF) is a card game based on the Tarot, with art from the 17th century Tarot card deck called the Tarot de Marseilles.
Tarot cards are widely used for game playing, creativity, divination and personal development. Our hope is that FoF can turn that inward reflection of the Tarot outward to playfully develop, maintain and deepen relationships between players.

Stolen Kisses lets you kiss whomever you want. Lavish these beautiful people with your love. Press your lips to the screen and hold to give better kisses and get more points. But don’t hold too long, or you might just give a bad kiss. Practice kissing with beautiful high definition graphics and realistic people. Kiss in different spots to see more. This game is designed to be an inclusive affection game.

In the Hearts of Players 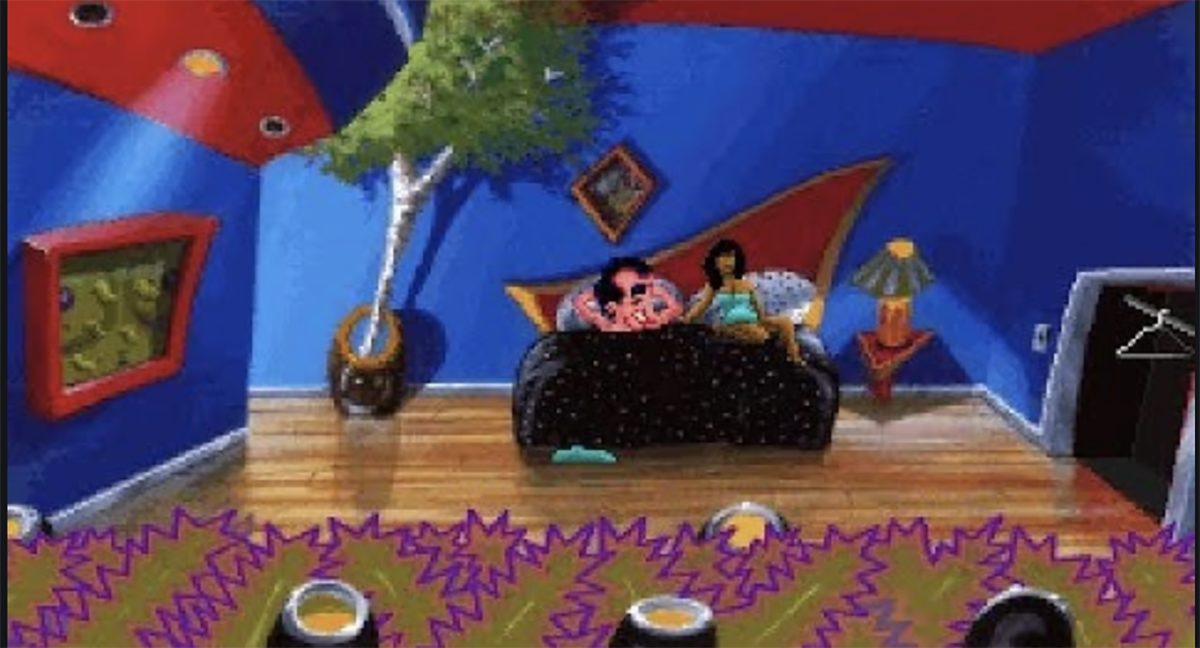 A game about a 40-year-old who has tired of his lonely existence, set in the city of Lost Wages. He searches for lost experiences and to finally find the woman of his dreams. 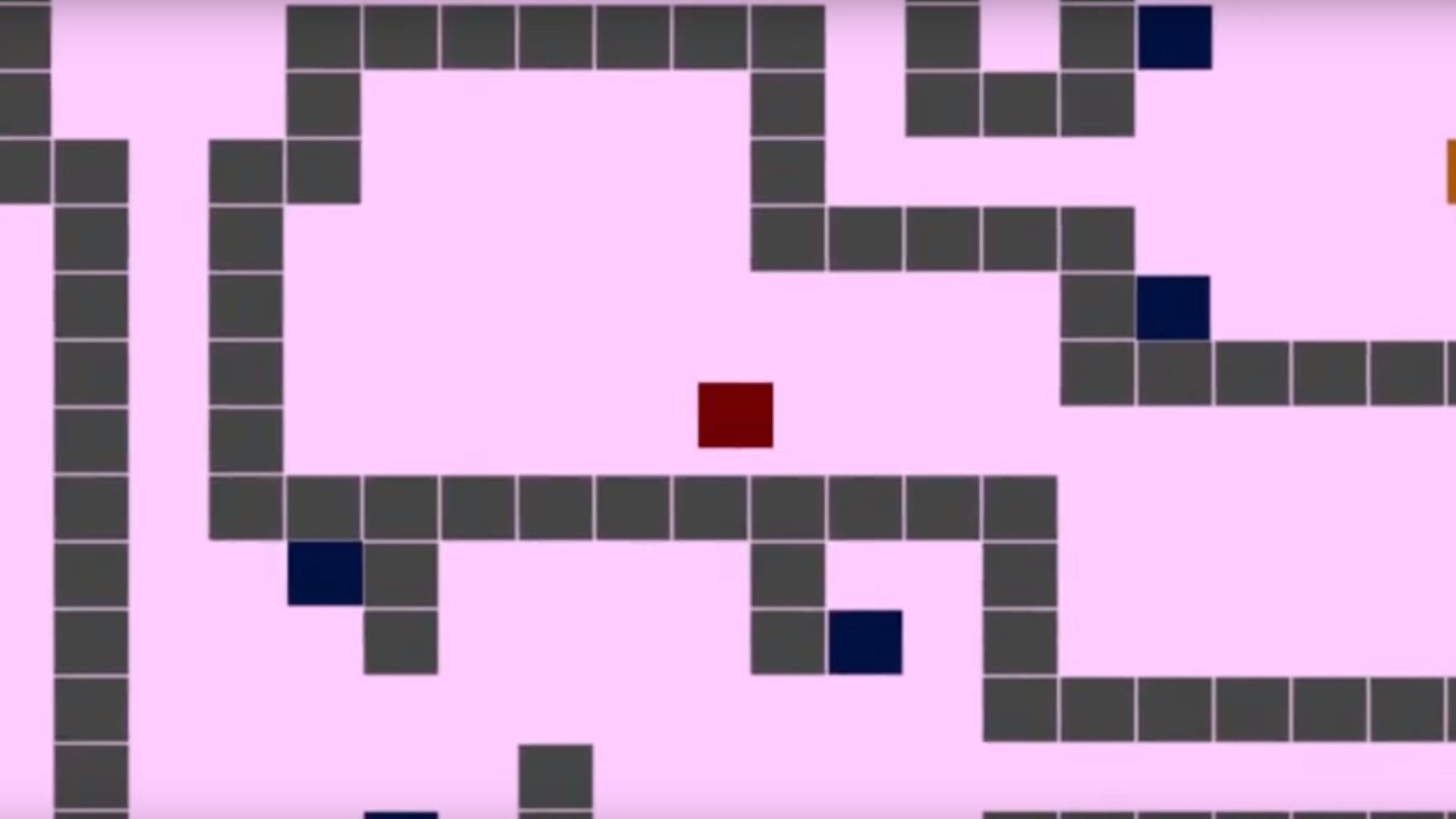 From the creator, "There was really just a lot on my mind about perception and how public space is experienced, and I wanted to translate that into an experience that other people could get." 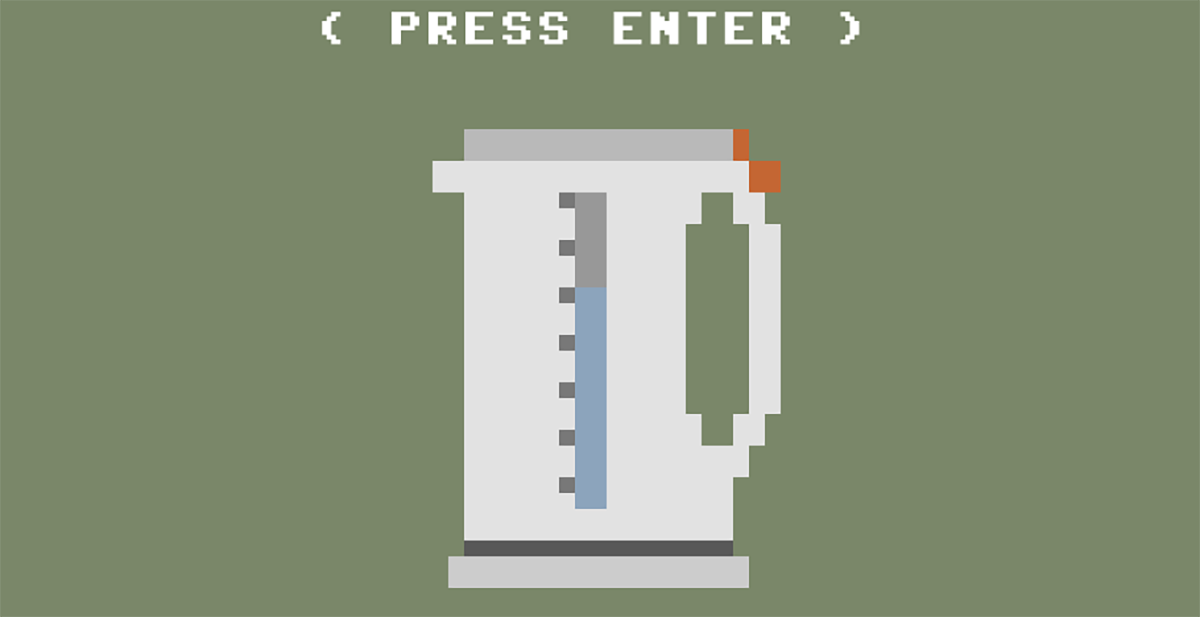 From the artist, Jason Rohrer, " In November of 2007, I showed Passage at the GAMMA256 event in Montreal. On my way back to Potsdam the next day, I telephoned my spouse and learned that our close friend (age 87) was effectively brain dead in the hospital and her son (my best friend in town) was agonizing over whether to remove life support . . I headed to the hospital to help my friend ... We conversed endlessly about life, death, love, and regret in the hospital lounge."

This 1981 text adventure offers a chance to live a story that starts in a sleezy bar. 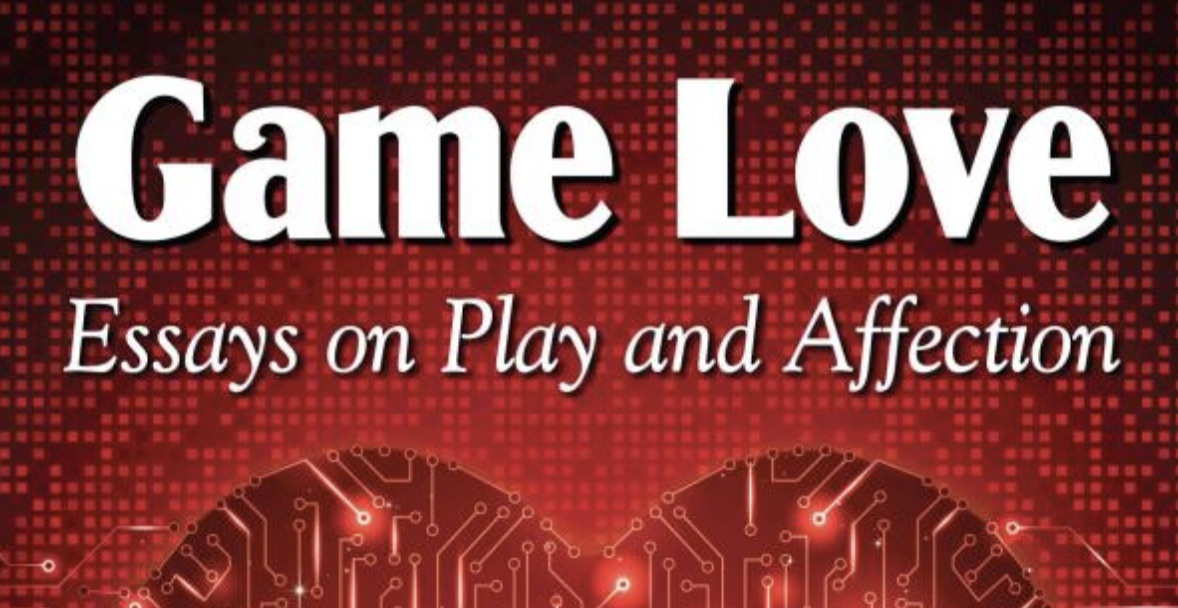 This collection of fresh essays explores the meaning and role of love in gaming, describing a number of ways--from coding to cosplay--in which love can be expressed in, for and around games.

After a tragic incident, brothers Sean and Daniel Diaz run away from home. Suddenly, sixteen year-old Sean is responsible for his young brother Daniel’s safety, shelter, and teaching him right from wrong. As Sean, your choices shape the fates of the Diaz brothers, and the lives of everyone they meet.

Heidi McDonald's edited volume features scholars and professionals from all over the world, across experience levels and the gender and sexuality spectrum, sharing experiences and analysis of romance and sexuality in video games.

Human-computer, human-human interactive interface kiss controller has been paired with a variety of software applciations including games

Night in the Woods

NIGHT IN THE WOODS is an adventure game focused on exploration, story, and character, featuring dozens of characters to meet and lots to do across a lush, vibrant world.

SHADOW OF THE COLOSSUS is a breathtaking journey through ancient lands to seek out gigantic beasts. Armed with only a sword and a bow, explore the spacious lands and unearth each Colossus, presenting a unique challenge to test your wits, determination, and skill.

A cataclysmic event plunges the land of Thedas into turmoil. Dragons darken the sky, casting a shadow over lands on the brink of chaos. Mages break into all-out war against the oppressive templars. Nations rise against one another. It falls to you and your allies to restore order as you lead the Inquisition and hunt down the agents of chaos. Explore, lead, and battle: Tough choices define your experience, and even one decision can change the course of what's to come.